WHY DOESN’T YOUR SPRITE HORN WORK ON A Mk 2 or 2A?

Previous Next
WHY DOESN’T YOUR SPRITE HORN WORK ON A Mk 2 or 2A?

There may be any number of reasons. The horn itself, after many years of exposure to the elements has simply rusted up. The fuse is not making a good contact. The wire to the bezel behind the steering wheel has broken (purple and black). The wire has broken, fallen off the horn or is not connected at the fuse box (purple wire). The horn button does not have a good earth, possibly because the inner steering column is totally insulated. This could be the most likely place to start after you have ascertained that the horn itself does work.

Good question how does the horn work? The purple wire from one terminal on the horn is connected to the fuse box terminal No. 2. Terminal No. 1, of the fuse box, should have a brown wire that supplies the 12 volts to the fuse box and is linked to the battery negative, the assumption is that the car is still set up as a positive earth vehicle. The purple and black wire passes from the bezel back to the second terminal on the horn. The horn button simply acts as the earth and allows the current now to flow through the horn, and hopefully make a joyful noise. What no noise? You have ready checked that the horn works so be suspicious of a “dodgy” earth. Remove the horn press from the steering wheel and, using a jumper wire connected to the terminal on the horn push carefully touch the other bare end of your lead to the chrome ring around the tachometer, hopefully now the horn sounds as you touch and remove the jumper. It can be any other earth spot such as the press stud for the tonneau cover or the earth lead that is attached behind the tachometer. Provided that the tachometer or the dashboard illuminations work then you know that this is a good earth. If you do not have a good earth initially it is possibly because someone has used insulation tape around the steering rack where it clamps onto the rack and the cross member of the car. This tape has been put around the rack to stop the rack from moving sideways each time you turn the steering wheel and should not be necessary if the clamps and rack are in good condition. If you don’t want to risk undoing the clamps and dislodging the rack then the problem can be solved by adding an additional earth to the inner steering column by “carefully removing only one of the set bolts for the pinion end-float adjustment a using a ring terminals (2x) and some black wire to join between this bolt and the earth terminal for the headlights etc. that is found on the inside or the RHS inner guard. (There should already have one earth terminal in place).

The horn. Some can be easily dismantled and they are held together with nuts and bolts. Most horns you will have to drill out the rivets and then replace the rivets with nuts and bolts. Inside the pieces of the horn the two terminals are connected to a heavy wire coil, electro-magnet which pulls the diaphragm in, this causes a set of points to break the contact and diaphragm returns to its static position, if the horn button is still being pressed then the process continue, in–out–in-out until the horn button is released. Somewhere on the case there is a set screw attached to these points and another set screw that limits the travel of the diaphragm. The travel of the diaphragm gives the horn its pitch.

In reality it is unusual to find that the coil in the horn has failed but the terminals connect to the coil are often cracked or broken. The horns are usually rusty inside and the metal diaphragms probably rusty.

The real purpose of this article was to give you an idea of what to check when the horn doesn’t work.

HOW TO MAKE A COLLAPSIBLE STEERING WHEEL FOR YOUR SPRITE 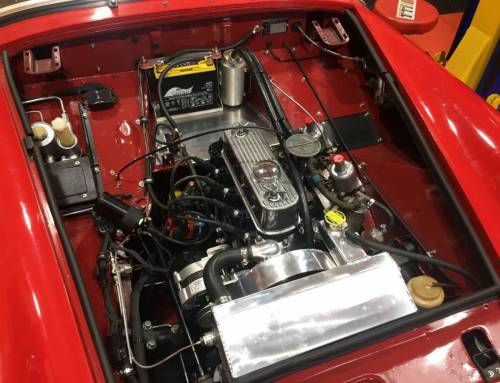 SUZUKI RADIATOR IN A SPRITE